Author and lawyer, Reno Omokri who is popular for sharing his thoughts on a range of issues has shared a very unpopular opinion.

Omokri took to Twitter, and citing Exodus 22:16-17, wrote that bride price should not be paid for ladies who have been deflowered before matrimony.

It is a common cultural practice in our part of the world for the intending groom to pay a bride price to the family of the girl he seeks her hand in marriage. According to Omokri, only chaste ladies prior to marriage deserve this honour.

He tweeted: What I am going to say will shock people. Scripturally, Bride Price is ONLY paid for virgins. Don’t argue with me. Argue with God. See Exodus 22:16-17. By virtue of Scripture (and also in traditional African society), you pay no bride Price for non-virgins. 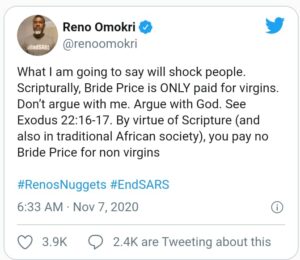 In other tweets, he faulted the use of churches, priests or pastors to conduct what he referred to as scriptural marriages; as a scriptural marriage was supposed to be, ‘a family affair and ONLY involves the groom, bride and parents. Feast is optional. Not mandatory.’

Read the tweets below